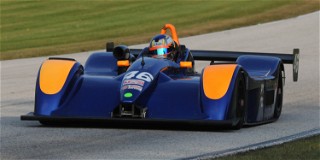 A long 21 years after his father earned the crown, James French, of Sheboygan, Wisconsin, earned his first SCCA National Championship to cap off the 57th SCCA Runoffs in its return to his home track, Road America. To build the experience, his father, Brian, joined him on the Prototype 1 podium on Sunday afternoon with a third-place finish of his own. Todd Vanacore, of Ormond Beach, Florida, split the father and son duo to win the silver medal.

The younger French started on the Tire Rack Pole and drove away from the field, first on the initial start and then again following a lap five full-course caution. The No. 46 Motorsports Enterprises Ltd Swift 014/Toyota then cruised to an 8.196-second win for his fourth career podium, all at the track that sits just 20 minutes from his home.

“We’ve been chasing this one for a long time,” the newly crowned champion said. “We have a handful of thirds and a DNF or two, but still, the win eluded us. To put that in the past is a great feeling, and to get one, especially here at our home track, is great.

“I’ve had the privilege to be out here since I was literally a baby, playing with toy cars in pit lanes. Dad got me into go karts here, and did Skip Barber here. I’ve been at this with him for a long time. To have a day like this where you can put it all together is really special. I’m very thankful.”

The early caution was caused when Chip Romer spun from second place, trying to chase French down. While unchallenged the rest of the way by his competitors, a sensor in the car indicated that the engine didn’t have much life remaining. Luckily, 13 laps was all that it needed.

“We definitely had someone watching out for us on that one,” James French said. “We’ve been chasing a bit of an issue with the crank trigger sensor. It let go on the last lap. Going into the Kink, I lost power and was just praying and hoping it would make it across the finish line.”

Vanacore inherited second place following the caution and knocked out enough speedy laps to hang on for second place in his No. 09 HalifaxPlantation.com Elan DP02/Mazda. The podium finish is the first for Vanacore.

“It’s an incredible feeling,” Vanacore said. “It’s just an honor to be on stage with drivers of this caliber. This class isn’t a stock or spec class—it’s as much the car as it is the driver. It’s a rocket ship, and she did great. I’m just so happy.”

The elder French earned his podium finish after moving around another local driver, Jason Miller, for third place on lap eight. He continued to crawl closer to Vanacore but was never aple to challenge before the checkered flag. Brian French last visited the Runoffs podium in 2000 at Mid-Ohio in the Formula Atlantic class, one year after his initial win, marking 20 years between visits before sharing the steps with his son—in the exact same car that he won with then, with some additional bodywork to make it a Prototype.

Darryl Shoff and Todd Slusher finished the race in the top five. Shoff was the Sunoco Hard Charger after starting 12th on the grid.

Live, online video coverage of Runoffs races, presented by Mazda, is available throughout the three days of competition at SCCA.com/live along with an audio race call—supplied by the Super Tour Radio presented by Hoosier Racing Tire broadcast team—and live timing and scoring for each National Championship race.